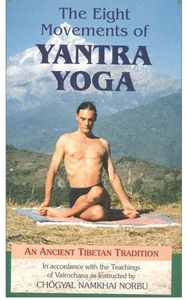 Shotokanknight information about the seller and his items
offlineAsk a question

Yantra Yoga, also known as yoga movement - a form of Tibetan yoga, which dates back to the 8th century, and only recently appeared in the art of the Western world. In Yantra Yoga postures should hold for a few seconds, and it is important to focus not only and not so much on the positions as at the transitions from one to another. Yantra Yoga involves 108 movements, as well as traditional breathing techniques and visualization.